Bombermad Evolved is a classic themed server that is a take-off from the Bombermad mini-game featured on the Graal Skills server. The project is currently on the host server Gileada where it is being developed.

Unlike its predecessor, Bombermad, which is set in a mini-game genre, Bombermad Evolved is played as an adventure style game. Many quests can be found that may be played on your own or with others with a small element of story involved. For this reason it falls more under the Classic genre rather then the mini-game genre. 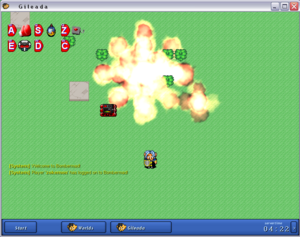 Retrieved from "https://graalonline.net/index.php?title=Worlds/Bombermad_Evolved&oldid=13001"
Categories:
This page was last edited on 9 September 2009, at 21:17.
Privacy policy
About Graal Bible
Disclaimers