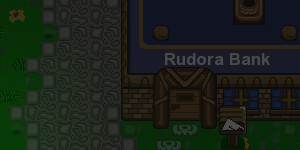 Rudora was one of the original Classic playerworlds of GraalOnline. It was originally created by Spark911, Wan and Fox, and has since been managed by GrowlZ and, now, Skyld. It maintains a strong classic theme using the default tileset. For the past few years, Rudora has been under slow redevelopment by Skyld, renewing the scripted features (including a complete conversion to the new GScript language) and a freshen up of the overworld. A number of new jobs have been added.

Rudora is currently a private playerworld, although it has previously been on both the Classic and the Hosted tabs.

Skyld is the only person currently working on the project.

A compliment of new features has been added to the older overworld in order to improve gameplay.

Retrieved from "https://graalonline.net/index.php?title=Worlds/Rudora&oldid=12954"
Categories:
This page was last edited on 9 September 2009, at 18:49.
Privacy policy
About Graal Bible
Disclaimers