Aeon is a server that features a little bit all of types (Role Playing, Modern, Classic, Futuristic). It is currently a Graal Hosted server. Formerly known as Arkland Empires.

Players are encouraged to check out the Aeon Forums. 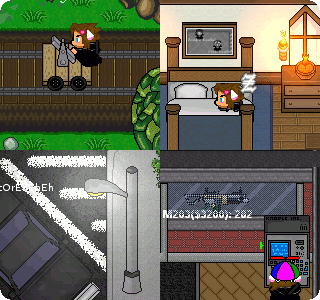 Aeon was originally renamed from ‘Arkland Empires’ to better fit the server’s theme. The word ‘Aeon’ can be defined as ‘an eternal frame of time’. The server’s worlds are modeled after different time periods. They are in fact worlds the co-exist within the same timeframe and are connected altogether through story or gameplay. In essence, to succeed you will have to play through all the worlds as a server. Aeon is made in the form of being a single server that meshes the four current popular Graal mods into a single fun server, not to be confused with hosting four different types of servers under one name. AEON once served as an acronym for the servers worlds (Arkland Elan Opan NSC-tt).

Aeon was founded early July 2003 by Sage Cypher and NerFBaSs (also known as Lothar, a past King of the UnholyNation), under the name ‘Arkland Empires’. These two founding members still remain part of the server’s staff, as Owner and Co-Owner, respectfully. Aeon’s current Managers (Napo and Poodie) have also been part of the development team since July 2003.

Arkland Empires was originally meant to be a classic-style server that brings everyone's favorites about Graal under great performance. However, as the server grew, the ideas became far too complex to put all together and the staff found it better to seperate guns/rp/classic from each other.Long after this decision, the server was renamed from ‘Arkland Empires’ to ‘Aeon’. Thus, evolving the ideas for success for the strong competition from the original server mods, Unholy Nation, Era, and Graal2002. As a result, the server staff decided to make a new type of server that features different worlds; each world with a different theme but all still the same server. To be complete on Aeon, one would travel to all the worlds as the storyline followed and complete everything that the four server worlds offer. Once that is completed there is more. Discussion of a secret complete new world exists for the strong of Aeon that requires all the techniques, items, and skills they have learned and acquired throughout serverplay yet confirmation is still unknown.

Aeon management has decided to halt all development on it's futuristic, modern and RP worlds. The server is now focusing on getting the classic-themed world, Elan, ready for the Classic Tab.

Lots of progress has been made recently, including the completion of a Kingdom management tool, and a revolutionary 'Satellite Radio'. The overworld levels have been under heavy reconstruction, and are nearing completion.

It is also planned to have the kingdoms up and ready soon. A 'Sports Complex' is set to open, which will include lots of fun activities for players.

Malinko, a member of the Playerworld Administration once wrote a basic review to interest the GraalOnline community about the concept of AEON. It can be found at the GraalOnline Communication Center at the following link: http://forums.graalonline.com/forums/showthread.php?t=63495. The purpose of the review was to advertise the playerworld, support the idea, and to interest the community on doing the same.

Retrieved from "https://graalonline.net/index.php?title=Worlds/Aeon&oldid=13000"
Categories:
This page was last edited on 9 September 2009, at 22:17.
Privacy policy
About Graal Bible
Disclaimers