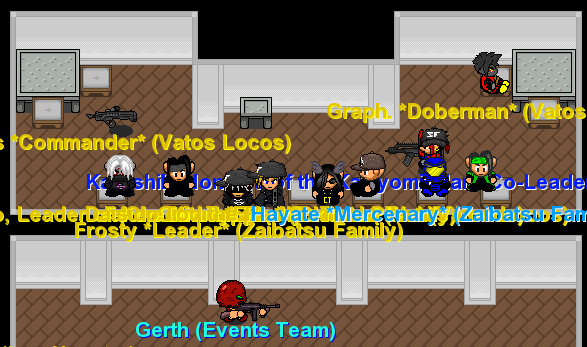 Players gather at an event called Lucky Prize which involves grabbing a block which randomly decides whether you win or fail.

Utopia was an under construction hidden playerworld which was last owned by Alfonso.

Utopia has had many staff; however, there are some staff that stuck with Utopia almost all the way through, or played some significant role in its development or creation.

The original owner of Utopia was Tony Torreto, using the name Entrok now. He first started the server, with the help of Ork. Ork is the current owner of Utopia. He has owned and managed the server many different times as it gets passed around.

Alfonso has been the manager of the server several times, and has created much of Utopia's content (especially graphics and levels).

Veteranspy, and his brother Katono have also held administrative roles in Utopia in the past several years.

Utopia has been around since 2003, around a year after Era was created. Utopia has been criticized many times for stealing graphics and other content from Era and other servers. In several cases, content was removed.

Utopia does not have any kind of storyline; it is based in present-day, much like Era, and it is mainly about events and player killing. Player killing is achieved by using modern-day guns and generic ammo types, such as handgun and shotgun.

Utopia had gangs that you could join. Players enjoyed joining a gang and raiding the bases of other gangs. Gangs had ranks, which were determined by the leader of the gang. The most notable gangs were Vatos Locos, Zaibatsu Family, and Chaotic Typhoon.

Utopia was first created in 2002, and was owned by Xenoww but later on handed over to Tony Torreto. The server was eventually passed on to Ork to own. Utopia then lost all of its players, and the server closed. In 2006, Utopia was brought back on a server owned by Knightmare who hosted the server, while Ork managed it. It was then moved to a server owned by Frankie because Knightmare wished to continue development on another project on his server. Utopia moved to Akeon's server because the time on Frankie's server was running out. Ork, the manager, finally raised enough money through donations and his pocket money to purchase a server, which Utopia was moved on to. Utopia had a high playercount on Ork's server for several months, and then it declined after many staff members left, such as Chris Vimes, Veteranspy, Alfonso, and Katono. Utopia was then put under the management of Chris Vimes, who was in charge of the development and managing the server. There was no expected release time for what has been codenamed Utopia 2.0. The project has since been abandoned.

Retrieved from "https://graalonline.net/index.php?title=Worlds/Utopia&oldid=16729"
Categories:
This page was last edited on 9 July 2010, at 06:01.
Privacy policy
About Graal Bible
Disclaimers