This playerworld was at one time a preview world, selected by the Playerworld Administration team in order to increase visibility and help the playerworld's staff team in hiring new members.

A Graal Playerworld currently on the Hosted tab.

Their official server website can be found here: Maloria 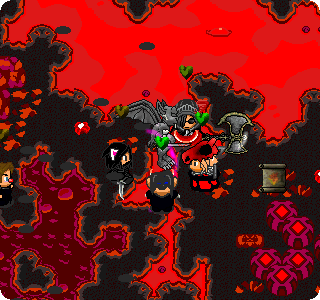 Founded by CyberX and BinaryCrash.

Maloria's roots goes back a long ways to the time of traditional Graal. The server was a moderately popular server pulling in a max player count of 40 to 50 per day and 120 at weekends. Maloria had a extremely large number of events, and had many advanced scripts for the time. Several changes in managers occurred, and then the server disappeared from the classic list. Not because it had gone under or anything, but because the staff were developing a new system. The new system completely redefined the traditional Graal style. Players started with 45 HP and 15 MP and through series of quests they could get 60 HP and 35 MP. There was a large overworld, but they had cut many of the events from their past server. Through most of this phase, however, the server was not listed on the serverlist. After much development in this system, they began working on a system dubbed v2.

v2 was a new system proposed by the staff that developed on the old system, that is not dubbed v1. The new system promised a leveling system and new items. Even different classes for players to pick. They picked a few lucky beta testers and after a while they were off. The new system was released in a public beta test. Players were told that this was temporary, and as soon as more development was done, a server reset would occur and the official version would begin. However, this never happened. The staff apparently lost interest in the idea and simply developed what they had. 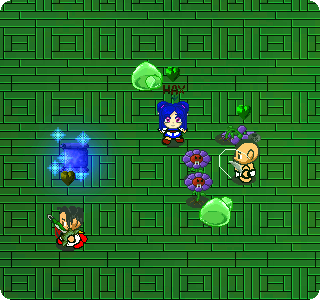 Through forgotten pledges and broken promises, v2 was never fully developed to the staff's original expectations. The server was left with a very unfinished feel to it. The classes the players were once promised, became unbalanced, favoring the fighter, simply because they developed the skills and weapons for the fighter before the scout and before the mage. Many staff moved on to work on their own Dev server, (actually owned by another person,) on a even more updated system called, as logically expected, v3.

Because of the lack of monitoring of staff activity and the actions of certain individuals, v2 was left in shambles. Unfinished "new" systems were released publicly and never finished. Certain items were extremely overpowered and many new features released by developers were not properly tested for bugs which resulted in item duplicating glitches. With the combination of these three things and the release of another RPG server to the classic tab, Zodiac, Maloria's player count fell dramatically. The management team decided it best to reset the whole server. While this may have caused a temporary increase in player count, old glitches and poor coding eventually found their way into the veins of the server and its economy again and the player count fell once more.

Maloria has been long since moved from the Classic tag and has gone under development trying to make a comeback. Maloria is still going strong however, and expect to see some changed soon!

Retrieved from "https://graalonline.net/index.php?title=Worlds/Maloria&oldid=19002"
Categories:
This page was last edited on 22 October 2011, at 23:15.
Privacy policy
About Graal Bible
Disclaimers