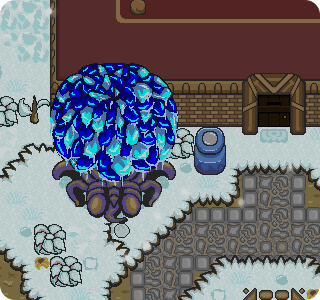 Varia is a "Modified-Classic" Server, dealing with teamwork and saving the land from two antagonist Draycon, and the other is just referred to as 'The Darkness'. Varia has a story line and for the first 8 Dungeons it's pretty linear but afterward the player will be able to somewhat develop they're own story. Storyline of Varia starts out as this.

October 1st, 20XX
The End Day
Savage nuclear war engulfs the world
All nations are destroyed
The Earth's axis shifts and a great mutation took place
Those remaining built a great machine
To oppress evil if it returned

He uses ancient technologies and magic to force obedience
Powers that were meant to be lost to time.
Now the great machine has been activated
And the world is in peril...

Arrow Keys - Movement
Use the Arrow Keys to move around.

A - Grab/Push/Pull
Stand next to a Wall, NPC, Player, or Object to grab them. Once you have grabbed you can either push, pull, or lift the object by pushing down the arrow keys

S - Sword
With a sword equipped, you can slash in front of you to damage or attack the object. You can also hold S to start charging and do certain special attacks, such as spinning, wind gust, fire blast, etc.

D - Weapons
When selected, active weapons will be assigned to the D key.

F - Item
When selected, items will be assigned the F key.

Q - Inventory
The Q key will open and close your current Character's Inventory. From here you can double click to equip or unequip weapons.

W - Stats
The W Key opens and closes your Stats Window. Here you can get a detailed break down of your stats as well as be able to upgrade them after you level up or complete some quests/dungeons/missions.

P - Pause Menu
The Pause menu is probably one of the most vital keys to playing Varia. You can also return the character select screen

O - Toggle BGM
The O key will toggle the playing of background music throughout the server.

M - Local/Global Map
The M key will display the players location on a local map. Depending on how many maps the player has bought/explored, the local map will be zoomable to display a global map.

Retrieved from "https://graalonline.net/index.php?title=Worlds/Legends&oldid=19849"
Categories:
This page was last edited on 19 September 2013, at 20:55.
Privacy policy
About Graal Bible
Disclaimers