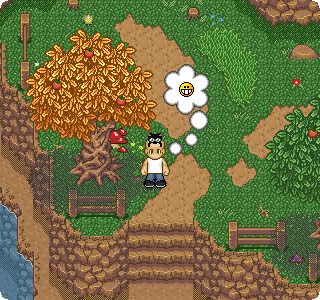 Esteria is a server that was first created by Nico. He brought together a group of developers to help with the project. Some of them include Crow and Angelu. The project was first known as "Eden", though the name was changed later.

Nico went away for some time, and Crow and Angelu kept up the server with their graphics, scripts and levels.

Eventually, the server got shut down; Nico couldn't keep it up.

Later, Nico was on his friend's account, looking for a server that would need a scripter. That's when he came on Graalopolis. It was going far downhill than what the owner, Switch, expected. Nico asked to be a scripter there, and Switch accepted.

Then, because the server wasn't what Switch wanted, Nico asked if he could implant his old server into this downhill one. And, yet again, Switch agreed. They had to wait a long time before they got the few things that was left of the old server. Infact, they were very lucky, meeting up with Angelu again, for he had most of it... atleast... we think. Otherwise we don't know where it came from!

So, the server was rebuilt, with the tileset they had, and the scripters Stan, Chompy, and, of course, Crow, who stuck with Esteria the whole way.

Just a few days later, Angelu decided to help working on the project again. Though that didn't last too long. He left because someone pretended that his work was stolen, and Angelu got pissed of it and quit, because he already heard that alot of times before.

Esteria only has a couple of people working on it. Here's the current list of staff:

Retrieved from "https://graalonline.net/index.php?title=Worlds/Esteria&oldid=13030"
Categories:
This page was last edited on 9 September 2009, at 22:28.
Privacy policy
About Graal Bible
Disclaimers