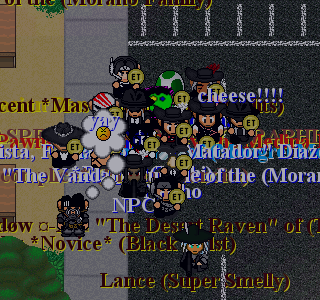 Era is a notably popular Graal Playerworld. It is based in a time period ahead of most current worlds by using a modern style and tileset.

Here's the link for the official Era Wiki (Guides, Weapon list and more inside!) Era's Wiki

For an updated list of staff, please see the in-game news interface.

Era has been released as a Classic playerworld in 2002.

The idea for Era was originally coined by Delph back in 2001. It was to create a World with a high level of interactiveness where players would work together to progress not only themselves, but to help shape the World around them, progressing from the early prehistoric days, all the way into the future.

He enlisted the help of a close friend, Angel, with whom he had worked together with on a number of other popular servers, to help refine the idea and eventually get a server set up where they could begin work.

There were a number of issues in the planning stage about how exactly such a World could be created, and they eventually settled on the idea of having three main eras of which players could progress to, or could choose to begin at from the start. These eras were the prehistoric age filled with large amounts of shrubbery, caves and dinosaurs; the present era with modern cities, jobs and cars; and the future with interplanetary travel, space ships and more.

It was decided to begin with the present era as it was in the middle and would also bring something new to the world of Graal.

Just as Era was beginning, Chrisz was brought on board to help with the scripting.

The number one goal at the forefront of development was to make as much as possible interactive. Such as trees being able to be chopped down, or new ones grown, flowers able to be picked, furniture moved and even the trash on the ground able to be picked up. Some of these did get developed and can still be found in-game.

A few months in to development saw Chrisz introduce the first gun on Era. Delph was highly opposed to such things at such an early stage in the server's development as having such items would detract from the peaceful nature he foresaw Era having, at least until means of enforcement were introduced to combat illegal use.

Shortly after the first gun found its way on to the server, Era was made public without the knowledge of Delph and it saw explosive growth as it was a new server with a totally different theme to traditional Graal. But these numbers wouldn't be consistent for a server that didn't have much for the players to do yet. It was still far from finished and after much protest from Delph, the server was made private again to continue development.

As hard as Delph tried to keep a hold on the creation of guns in favour of other more important aspects of the original vision, more, and more were created and Delph began to feel that he had lost the battle. Once the server was made public again, it was clear to him that there was no way of getting the server back on track and decided to take his leave once he finished developing the mining system.

Down the road Era had gained one of the highest playercounts on Graal. The then-current manager, Chrisz, quit and the server was given to Jenn. Jenn attempted to revamp the server, introducing features such as the famous flowers, but the playercount of Era gradually declined.

Rick was then given the server and he worked for almost half a year together with Stefan to fix the server up and it was released in October of 2005. The PC server is still based on the scripts and systems introduced with that release, including custom movement (adapted from Zone), businesses and parties.

Retrieved from "https://graalonline.net/index.php?title=Worlds/Era&oldid=19876"
Categories:
This page was last edited on 10 December 2013, at 06:24.
Privacy policy
About Graal Bible
Disclaimers