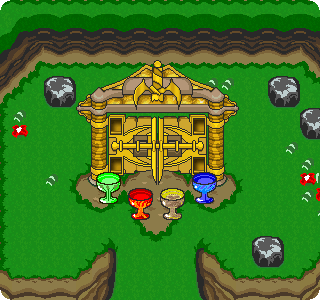 Classic is a server that focuses on its adventure aspects and player interaction rather than having tiresome grinding or large role play elements. As Graal's oldest world, it has a lot of prestige, reputation and history amongst players, while its levels and content have and will continue to be closely built to the original Zelda-esque style.

As a Classic-subscription-enabled server, Classic is available to players with a Classic subscription despite its current Under Construction status, though Trial accounts will still have restrictions in-game.

Classic was the first server to emerge on Graal, and as a result, has since gathered a strong reputation amongst oldbies.

For a long time, under Tyhm's management, the server slowly evolved with interesting new ideas such as 'races', where players gained attributes of their chosen race; for example, the Zorbi race could trap other players inside bubbles in order to escape a battle, though, in the end these races were removed after players complained of 'unfairness' between them.

As time passed, a storyline and cut scenes were integrated into the server, and the overworld was molded to fit more cleanly together, eventually shaping the Classic world into a series of islands. These changes were prompted by the influx of new players and the new ability to make mapped levels, which allowed players to see nearby levels as if they were part of one large area. To appease some of the older players who were unhappy with these changes, a quest was formed which took an early version of Classic and was placed into a 'museum'.

By mid-2003, Classic was brimming with content, with some 7000 levels on the server. While this was great for the players, especially those with a tendency to explore, Tyhm and his development team were finding it increasingly difficult to convert everything for the soon-to-launch NPC-Server technology, which was required of all servers.

In March 2004, due to other commitments, Tyhm left the management of Classic, and after a brief period of anarchy, Stefan stepped in, appointing a new manager, Master Storm, on the 7th of April. Storm made it his primary focus to get the NPC-Server released, as it was by now some many years overdue. Due to various circumstances, especially the difficulty with converting everything, Storm decided to instead rebuild Classic from scratch, focusing on getting compatibility with the NPC-Server at a core level, and expanding the server with content later.

On January 6th, 2005, the NPC-Server launched for Classic. This came somewhat early in the development of Storm's “New Classic”, but was pretty much forced, since support for old-style Classic GServer was being removed. It is fair to say that the server was rushed in order to meet this deadline, and that this has had large impact on quality. Not long after, GScript 2 was introduced, and this further delayed progress, as time had to be dedicated to meeting this new standard rather than to the creation of content.

Since the introduction of the NPC-Server, and up until the present day, Classic has been using custom systems for things such as movement and hit detection. While these have been designed to closely emulate the built-in systems of Graal, by using custom movement, many interesting opportunities arise. The custom movement also allows more subtle tweaks, such as allowing for a greater range of player movement speeds, and the ability to make various bug fixes.

This era of the server saw a massive expansion of the overworld, but it was to little avail, as there wasn't a great deal of progress made in terms of questing content which has historically provided the server with its identity. Unfortunately, the overworld was largely empty and provided little incentive for exploration. The custom systems, while a sound concept, suffered from a lack of organization and abstraction. As they grew in size from their initial rushed foundations, they had become difficult to work with, which slowed down the creation of new content.

In February 2009, Thor was promoted from his position of Development Administrator to co-manage the server with Master Storm due to his previous releases of questing content as well as reorganization of existing content. DarkCloud took direct control of Development in Thor's place, however, attempts to move forward with the server were, for various reasons, unsuccessful.

There remained a close-knit community from 2005 to 2009, these years largely occupied by interaction-based gameplay such as events, sparring, and guild activity. But gradually, as the older players left and fewer new players became interested in the server, by June 2009, the player count had dropped down to virtually nothing.

At this point, due to a very negative feeling surrounding the server, DarkCloud decided to step down from his position as Development Administrator, leaving the server management a major decision to be made as to which direction the server should take.

Master Storm and Thor were both in agreement that the best route to take regarding the server would be to remove the existing content and repeat the process of remaking it from the ground up. However, this time the reconstruction would be carried out as a hidden server to focus on development and be fully prepared for maintaining a high player count in future, rather than get distracted by the politics that staff had previously been engulfed by, or by keeping existing players occupied.

Planning and preparations commenced and eventually the wipe was completed on the 31st July 2009. At this point, although the server was hidden, it was to remain publicly accessible for old or interested players to see the work in progress. While the new custom systems were being developed, the players were using the built-in Graal systems to give the development team the time to build the custom system with more care and organization. The new systems were implemented as early as October, which was considerably quicker than the previous systems had taken to make between 2005 and 2006. It was within this time that the decision was made for Master Storm to step down as the server's manager, leaving the responsibility lying solely in Thor's hands. However, Master Storm continued to help with the system and networking side of development.

While things such as quest resources, storyline planning and further system construction were being worked on, a new-and-improved spar arena for visitors to enjoy was released, and was soon followed by the construction of a “team events system” with the ambitious goal of handling, rapidly remaking, and improving all future team-based events such as Capture The Flag and Battlegrounds.

It wasn't until August 2010 that Classic saw the release of its starter content, which had the purpose of acting like a tutorial to new players, but in a more enjoyable fashion and integrated into the storyline, as opposed to isolating them from the overworld and other players, as had been felt in previous versions of the server.

Since the focus of the server development was on continuing the quest content, by December 2010, Classic had seen the release of both a second set of quests, plus a dungeon in the form of an entirely remade Zol's Toilet. As of July 2011, a second dungeon has been released in the form of the Tomb, which follows the quest releases of the Christian's Shop task, as well as the warp ring cave.

In addition to quest development, Classic has also seen the release of the Trading Card game, a form of end-game content. There is also on occasion the hosting of events such as Capture the Flag and Battlegrounds when there are enough willing and able participants visiting the server.

Thor is the current Manager of Classic, and is in charge of directing each staff divisions, also well as overseeing the development of the server.

Can be contacted via:

Currently not fronted by a specific administrator, the development team is there for all aspects of development, from roles such as planning, graphics, GANIs, and tiling all the way to scripting. The more prominent members of the development team throughout the current reconstruction of Classic include WhiteDragon, Racil, and Skyzer, but there have been many small contributions from a large list of people.

The Graal Police is the oldest, and in some ways most prestigious, of all the staff divisions. Led by Stryker, this division is in charge of ensuring that all players act in an orderly manner, and jailing those who offend. The GP are also out to detect those using hacks/trainers to gain an unfair advantage, deterring them as appropriate.

The events team is intended to ensure that all players are well entertained through various events and tournaments and therefore will play an important role once the server goes live.

The FAQ team, led by Ranger, was created in order to help players progress through quests, and become familiar with Graal and Classic. Originally a task done by GPs, the FAQs are the people to turn to when you've forgotten a vital control, need help obtaining a given item, or simply, if you don't know what to do!

Retrieved from "https://graalonline.net/index.php?title=Worlds/Classic&oldid=18679"
Categories:
This page was last edited on 27 July 2011, at 14:07.
Privacy policy
About Graal Bible
Disclaimers