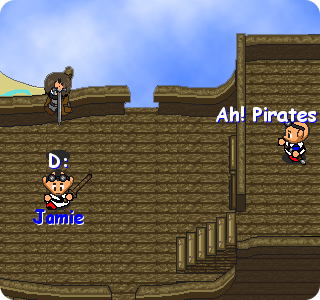 Azure Skies was first started in middle 2008 when Jamie was given space on Forgiven's server to develop his own ideas. Hiring a small team, just him, lukej and Forgiven developed a theme of Sky Pirates, adding elements of Classic Systems (Like HP and inventory) with a mix of RPG storyline (Sky Pirates) and custom systems, such as the sword draw/sheath system and such. Unfortunately, the server began to falter when the GFX artist, lukej, started university and Jamie had exams at school.

On 6th of January 2009, Jamie decided to start this server once more, finding good friend Soala and presenting his ideas to him. After a little persuasion, Soala agreed to head in the direction Jamie wanted to take and as of (11th January, 2009) the staff list consisted of Soala, Jamie and a new addition to the team, Rawr. Staff are still being sought for to push the project further as Azure Skies has hopes of becoming a well known, large playerbased server filled with activities for every kind of player.

If you wish to join the team, simply do one of the following:

Retrieved from "https://graalonline.net/index.php?title=Worlds/Azure_Skies&oldid=16182"
Categories:
This page was last edited on 30 May 2010, at 12:14.
Privacy policy
About Graal Bible
Disclaimers