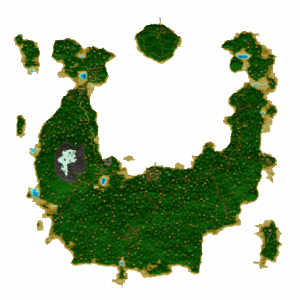 Crescent Pirates is one of the five kingdoms on Graal Kingdoms. They, as the name suggest, have a pirate theme and their military is heavily leaning on their naval cunning.

The Crescent Pirates, or Pirate Crew as it was called, was founded in Graal 2001 by Ghost Pirate. Going by the name of Governor Girum Rivclaw he was and still is the most recognisable Governor to lead the kingdom.

The current leader of the Crescent Pirates fleet is Admiral Naithaniel Lionheart.
The Crescent Pirates navy is the most noticeable, and deadliest force under the command of Crescent Pirates.
The Pirate navy never shys away from a challenge is always the victor due to superior numbers and skill. Their navy has often be branched out into various crews. Such as the Phoenix Crew, lead by once great Admiral Raziel Nasar and his brother Cheops. Not to mention the devastating Tornado Squadron, founded and lead by Commander Chris Steele.
The Tornado Squadron was a group of selected elite boat battlers. Who were the first in and last out in navy warfare.
The squad consisted of: Chris Steele, Eric Steele, Naithaniel Lionheart, Felix Lionheart and Zeltino Zanza.

The Blood Raiders act as body guards to the leaders of the Crescent Pirates while ruthlessly rooting out and eliminating any threat to the kingdom.. The Blood Raiders specialise in making enemies vanish without a trace and killing foes without a mark.
This small group of warriors are trained in many aspects including melee combat, archery, Alchemistry, Wizardy and Religious arts, mind manipulation, battle field tactics, use of plagues and poisons, impersonation and disguises, sailing and naval warfare, silent movement and breaking into enemy territory, and escape and concealment.

The Blood Raiders are a small group committed to the protection of the kingdom inside and out. They are ready to serve the kingdom from doing a mission into enemy territory to guarding royalty in their voyages.

The Blood Raiders follow the battle field tactic of causing chaos in the enemy ranks. This is done by poison, plagues, magic and out right blood frenzies. Thus how they got their name. They also use traps and ambushes for assassination and also use potions that would cause great pain on its victims.

Pirton is the capital town on Crescent Isle. It is located east of the castle. Pirton is the only town on Crescent Isle where you can purchase a house flag. Pirton also holds the card room and a rum maker.
Pirton is the best defended town of the island as the war room resides there. Being at the centre of Crescent it is the most protected from a boat attack and it has multiple docks there ready for boats to scramble and intercept incoming threats. Also being a short walk away from the castle it is easy to re-enforce the town.
Pirton was also known as Traders Row and still is referred to by that name by some.
Previous Mayors of this town are Sam Schlurf, Maroku Dibides, Padraig Lionheart and Paul Dibides. 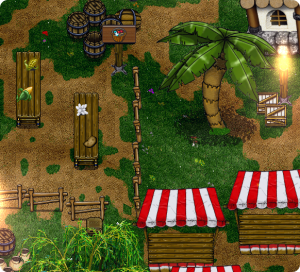 Westford is located on the north-west of the island. It's where the ferry comes to from Hotaru.
The Business Strip or Shop District as some call it is located in Westford. Many Pirates have set up shop selling various loot they've purchased or pillaged.
In Westford you can craft a hook, the weapon of choice for some pirates. As well as fortifications and wall to be used to defend the castle and towns in the times of war.
Retired Governor Felix Lionheart was one Mayor of the town. Along Commander Sage Cypher and Commodore Blue Zakuto. 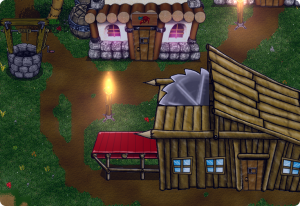 Milton is the town in he south-east of Crescent Isle. The Retired Governor Yannick Steele was once Mayor of Milton, aswell as Commodore Proto Steele.
In this there is a woodcutter and a mill to turn your corn into flour. In this town you can craft furniture for your house or or get your hair done in the hairdressers.

Rum Town is the town in the south of the Isle. In Rum Town there are market stalls for people to sell their unwanted items and make some money. It Is also home to a spar arena and pub owned by Chef Steele. Naturally It has a rum maker there too.
Zeltino Zanza was once Mayor of this great town, as well as Jack Steele and Cell Darkblade Zakuto. Chris Zakuto was also mayor for a short time.
The town currently has a Mayor Florent Easton to run it, assisted by Boris Easton. 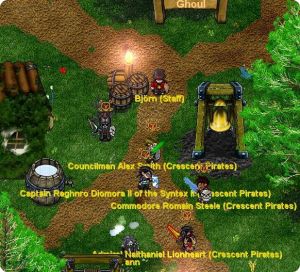 Ghoul town is located on Ghoul Island, the small island to the north of Crescent Isle. On the island there is a Pirate Fort used for training their deadly Blood Raiders. The town is home to the famous Sinkin' Ship Tavern with the well-known Bar Brawl that occupies the top floor. This has been the hotspot for many Crescent Pirate events.
On this town there resides ghosts of dead Pirates as well as their Mayor Grisby Howl.
In Ghoul Town you can craft the pirate hook in the blacksmiths.

Ghoul Town was uploaded on to Graal Kingdoms on the 14th of January 2008.

Retrieved from "https://graalonline.net/index.php?title=Worlds/Graal_Kingdoms/Crescent_Pirates&oldid=20136"
Categories:
This page was last edited on 23 September 2014, at 13:59.
Privacy policy
About Graal Bible
Disclaimers