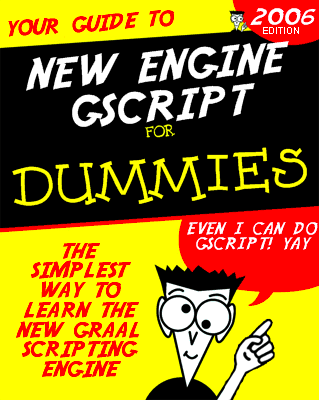 New Engine GScript for Dummies is a guide designed to aid the learning of the new scripting engine, frequently dubbed 'gscript2'. This guide will explain the basics, such as functions, variables and some Gscript-specific concepts that you will need to know in order to get scripting in no time. The guide is indexed at the top of the page, and by clicking one of the index links, you will be taken to the appropriate section. If you haven't really a clue where to start, then you're probably best reading through the entire guide.

Who is this for?

This is for absolutely anyone who is interested in learning in Gscript. Having some previous knowledge of scripting would be beneficial, but isn't required.

What should I do if I have a problem or a question not covered here?

You can, of course, post your problem on the GraalOnline Forums in the NPC Scripting section. Similarly, you can also contact a member of the Global Scripting Team via Forum PM if you think that you require more direct assistance, although usually forum regulars will be happy to help.

Through this guide, a number of terms are likely to be used. In case you are not sure exactly what any of the terms mean, you can look them up here!

So, hopefully by now you have a general idea of what GScript is. Now, it's time to fill you in on how to use GScript. With the help of this guide, hopefully you'll be creating scripts of your own in no time!

It is important to remember a couple of very basic, but very important concepts when using GScript.

A function, like mentioned in the Glossary of Terms, is a defined block of instructions. Practically everything you do in GScript will rely on functions. First, let's look at how you can define a function.

The syntax for defining a function is, in fact, very simple. Let's look at an example.

The first thing to identify is the 'function' keyword. This tells the scripting engine that you're going to define a function. This is absolutely necessary in defining functions of any kind yourself.

Second, you'll notice a name - 'myFunction'. This is the bit where you specify the name of the function that you're defining. This can be anything, providing that it doesn't contain strange symbols (usually an underscore '_' is the best suited symbol to split up function names with, since other symbols can cause errors).

Thirdly, you'll see (). This is a convention that is later used for parameters, but for now, that's not important. Just stick () on the end of your name for now.

A fairly important concept is the idea of scopes. As demonstrated before, anything inside the { and } of a function means that it's a part of the function. Now, imagine that the entire script is like a hallway, and behind every door, is a function. When you walk into a room and close the door behind you, you are in a fairly closed space. This is true of functions.

Now you've created your function, it's there to be used. Anywhere inside your script, you can call this function using the following method:

Note that the 'function' keyword is not present because we are not defining a function, we are just calling one. Now, the moment the scripting engine hits a function call, any code that you put inside of your function will run. Let's use the following example:

This is a very basic function that just sets the player's chat text. Let's call the function.

A function execution can return a value to where the function was called. This is how a lot of Graal's built-in functions work: by returning the value.

Take the following example, which will return the value of timevar2 (a built-in variable which counts how many seconds it has been since 1st January 1970):

... then this.time will be set to the value of timevar2.

It is very important to remember that the return function immediately ends the function's execution. Therefore:

player.chat = "Bar"; won't be executed because of return; being used.

Now, you've seen how functions work. The next very important part is using variables. As you have read in the glossary of terms, a variable is simply a sort of object that stores information.

Every variable must have a unique name. This is how you will access the value that is stored inside of the variable whenever you want to use it.

Every variable also has a type. In GScript, there is a clever little system in place for variables called 'variants'. This sounds complicated, but is in fact also very simple. It simply means that the variable's type adjusts itself in order to suit the sort of data that it contains.

For example, if you make the value of a variable "Hello!", then the variable automatically becomes a string, and simply because you assigned it a value of a string. In GScript, all string values must be enclosed in "speechmarks".

What about a number? You don't even need to use speechmarks for numbers - you just type the number! Simple, no? When you do so, the variable automatically becomes either an integer or a float type in order to suit the number that you just put in it.

As already established, this is simply the information/data that the variable contains.

Why variables are useful

Variables are incredibly useful for a number of reasons. They allow you to:

Setting the value of a variable is even simpler than defining a function. Let's use an example.

Looking at this, it's easy to see the logic here.

In our example, we initially set the variable "myVariable" to "Hello!". This turns the variable automatically into a string. However! Immediately after, we have rewritten the value of "myVariable" with the number 3. Since there are no decimal places, the variable suddenly becomes an integer.

Any time you want to get a variable's value and use it, you simply write the name of the variable. This is best explained while using a Conditional Check.

There is another operator, called the comparison operator. It's two equals signs stuck together (==), and just instructs the engine to compare the two values. If the two values are the same, then it'll return TRUE. If they are different, it'll return FALSE.

This is simple enough. Observe the following example:

This time, we're checking to see if 'myVariable' equals "excellent". Since it does, this statement will evaluate to be TRUE.

Now, we're checking to see if 'myVariable' equals "fabulous". It clearly doesn't, since we set it's value to "excellent" instead. As a result, this statement returns FALSE.

Working with if () checks

To do this, you use an 'if' statement. 'if' is a very simple operator (it doesn't get complicated yet!) that simply runs one thing if the statement you give it is true, and optionally runs another thing if it isn't.

Since using examples so far has been the common way, let's see one here. We'll even include a bit of what you've learned already:

Now. The first thing about an if statement is giving it something to check. The statement "myVariable ==" alone will return either one of two values - TRUE (1, one) or FALSE (0, zero).

An if () statement by itself will only check if something is true. If not, it'll ignore it. If you put an else in, like in the above example, that code will be run in the case of a failure.

Storing the result of a conditional check

Now, as previously mentioned, a comparison (==) will only produce either true or false. If you want to store the value of a conditional check for use later, then you can assign the result to a variable, instead of using it in an if () check now.

... saves the result of the check into this.variable. So later, you can do:

... to see if the check was successful. Similarly, you can do:

Data can be manipulated in various ways. For example, you can modify parts of a string. You can apply math functions to a number. This section explains those sorts of functions.

GScript allows you to perform basic operations like add, subtract, multiply, divide, etc. However, GScript does not use functions for this. Instead, it has a set of "operators".

Note how the operators are between two values: the value to start with, and then the value to operate with. The use of an operator returns a value in the same way as other comparisons, so let's take this example:

If you're doing complex operations, it is important to ensure that your priority order is correct. In it's most basic mathematic form, the default order of operations is the following:

That means that in a complex expression, multiplication takes priority order over addition, and that a part of the expression surrounded by brackets will always be calculated first.

Brackets are very useful because it allows you to specify the order of operations. Consider this example:

... is calculated in this order:

There are another set of operators which allow for basic math manipulation on a variable. These allow you to add and subtract to a number variable, without having to perform the expression yourself. For example:

The increment and decrement operators are as follows:

Occasionally it is useful to just add or subtract one to a variable. There are operators to do this, too.

Booleans are, plainly and simply, true or false values. They don't do anything else.

Technically, true is the same as 1, and false is the same as 0, but the keywords are here to tidy things up a bit. Booleans are very useful because they help to control how your script operates. Now, as you know, a conditional check will produce a true or false result. For example:

No one can call them self a true Graal scripter until they have a firm grasp on the concept of objects. Basically, in GSCript, all items of a given type - players, NPCs, levels, Gui Controls, etc - act in the same way. Objects of the same type give you the same kinds of data, and can even be controlled in the same way.

Let's say you wanted to access some kind of data from the Control-NPC. It turns out that the Control-NPC itself is an object. All you have to do is create an object which represents the Control-NPC. After the object is created, you can use variables from it, or execute commands as if it were that NPC. For example:

You can even use the object directly:

Here, the 'Waldo' npc is being called directly. As you can see, the NPC's level is also an object! Finding Waldo has never been so easy.

Players work the same way (they are also objects):

This script would find the player with the community name 'Stefan' and set his chat to 'Hi! I'm playing Graal!'. Also, no matter how you got the player object, everything works the same way:

In fact, most everything within GScript is some type of object! That weapon you're using to wreak havoc on your enemies? Why, that's a TServerWeapon. Those bullets hitting your foes? TProjectile. That level you've been jailed in one too many times? TServerLevel. You can access all of these objects with GScript. If you decide to be more ambitious, you can even create your own.

Retrieved from "https://graalonline.net/index.php?title=Creation/Dev/GScript/GScript_for_Dummies&oldid=18479"
Category:
This page was last edited on 21 June 2011, at 15:34.
Privacy policy
About Graal Bible
Disclaimers