NC stands for NPC-Control, which allows server administrators to control the NPC Server, and to add, edit, update and delete scripts on a server.

NC is a part of RC (the tool which server staff use to administrate servers), and requires the "NPC-Control" right on the server. When NC is active, you will find five NPC-Server related buttons inside your RC.

What are these buttons? 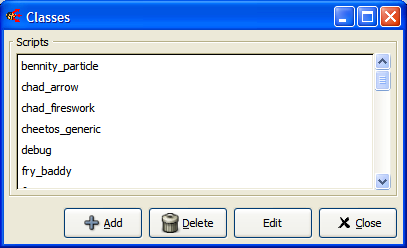 The Class list brings up a list of all the classes currently saved on the NPC-Server. Classes are scripts on a server which can be brought into any other script, such as a level NPC, or a Putnpc2 NPC.

You can add scripts to the server by clicking the Add button, at which you will be asked to name the class. When you have named the class, you will then be given a window to put your script into. Clicking Apply will save your script, and place it in the Classes list, where you can return and modify your script at any time.

If you want to delete a class, select it in the Class list and then press the Delete button.

The NPC Level list shows an editable list of levels, which are being served by the NPC-Server.

The Local NPC list button, when clicked, asks for a level name. After entering a level name, the NC will give you information and statistics on NPCs in that level. A typical NPC may look like this.

These are all details related to the given NPC, such as it's present image, any visual statistics such as head, body, and colours, timeout, script size, timeouts and position. Variables in the NPC that were set on the serverside may also be shown here.

This is quite a useful way of finding out details for NPCs in a level, in case you need to debug them.

The Database NPC list gives a list of Database NPCs on the server. Database NPCs have the capability to be anywhere on a server, they have their own identity (#N) and have the ability inside NC to allow the user to modify its flags and script.

Like classes, you can add a new Database NPC by clicking the Add button, which will present you with a screen like this. 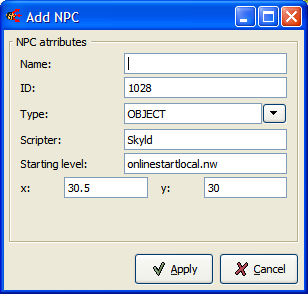 Here, you can specify various things about the NPC, such as it's Name ID, it's script ID, the type of NPC (mainly for identification purposes), the scripter's name and it's default level, X and Y.

The names and IDs must be unique when creating a Database NPC.

When you create your NPC, it will be added to the Database NPC list, and from here, you can start to work with it. Right-clicking a Database NPC will give you a menu that looks like this. 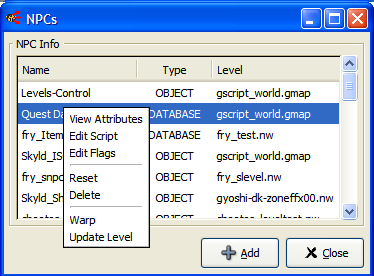 From here, you can: 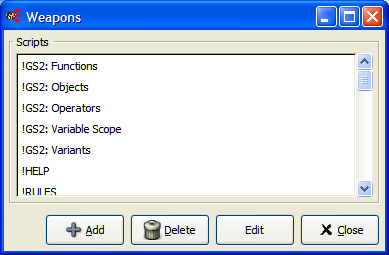 The weapons list contains a list of all the weapon scripts on the server. Weapon NPCs can be added to players, and appear in the Weapon Select.

Like Classes, you can add new weapons by clicking Add and specifying a name. Then you can save a script into NC and add it into the player's attributes.

You can re-edit a weapon NPC by selecting it in the Weapons list and clicking Edit, or deleting by clicking Delete.

Weapon NPCs also accept an Image, which can be set at the top of the Script Editing window, and will give the weapon an icon to display in the player's Weapon Select.

There are a couple of "RC Commands" which allow control over the NPC-Server. To use them, simply type them into RC. The main ones are as follows:

Retrieved from "https://graalonline.net/index.php?title=Creation/Dev/Basics_of_NPC-Control&oldid=13116"
Categories:
This page was last edited on 11 September 2009, at 23:16.
Privacy policy
About Graal Bible
Disclaimers